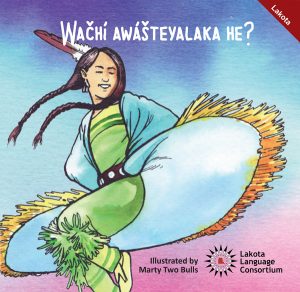 The first in a series of six children’s books to be published solely in Native American languages has been released in the Lakota language. “Wačhí Awášteyalaka he?”, or “Do You Like To Dance,” is an 18-page monolingual Lakota picture book developed for early elementary and preschool children.

Illustrated by Oglala Lakota artist Marty Two Bulls, the book uses the topic of dancing to help children with the use of adverbs and basic question and answer structures. An additional five other picture books will first be released in Lakota, followed by versions in Crow, Hidatsa and Mandan.

Two Bulls, also a sculptor, jeweler and designer from Pine Ridge, S.D., whose satirical cartoons are regular features at the Indian Country Today Media Network, is among three Native American artists who are part of a team illustrating the series being published by The Language Conservancy and the Lakota Language Consortium. The others are Standing Rock Sioux cartoonist and illustrator Omani Luger of Fargo, N.D., and Maliseet artist and animator Tara Audibert.

Each of the books is designed to provide a specific area of language education. In addition to Wačhí Awášteyalaka he?, upcoming titles to be released in Lakota on Dec. 1 will include:

“These books are designed to immerse children in their own indigenous languages and to be used as a tool for parents, caregivers and teachers looking to stem the tide of the loss of indigenous languages and to offer an option beyond use of the English language,” said The Language Conservancy Executive Director Wil Meya. “Our aim with these monolingual children’s stories is to provide an opportunity for children to be absorbed in a cultural authenticity that can rarely be provided in the context of reading material.”

All of the children’s books are available for pre-order through bookstores at The Language Conservancy and Lakota Language Consortium websites. Be looking for upcoming announcements for a public reading in Lakota of the picture books at a special children’s book hour at the book store at Prairie Edge Trading Co & Galleries in Rapid City, N.D.