If you’ve been to LSI, you know that every year the organizers of the institute plan something exciting. Last year participants and their families enjoyed a special pre-screening of Rising Voices/Hótȟaŋiŋpi, and in 2014 participants had the opportunity to take a Lakota/Dakota Drama and Performance class, which culminated in a production of Iktómi Lečhála Tȟawíčutȟuŋ (Iktomi’s New Wife). 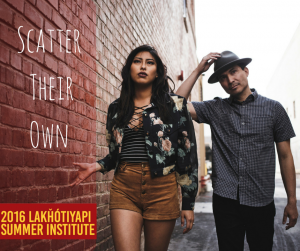 There are no doubts that this year we’ve got something special up our sleeve. To celebrate LSI’s 10th Anniversary, we are very excited to welcome Scotti Clifford and Juliana Brown Eyes-Clifford, a.k.a. Scatter Their Own for a performance and guest lecture at LSI!

The dynamic duo has been gaining popularity on the Alternative Rock scene since before 2013! Now just kicking off their 2016 Spring Tour, STO were delighted to receive the invitation for LSI. In addition to a performance, Scotti and Juliana will give a guest lecture for the “Audio Materials Development” course and share their experiences in creating music.

If you haven’t heard them perform, check out their website or watch the video below. The group has described themselves as “Alter-Native Rock and Roll”:

SCATTER THEIR OWN, Scotti Clifford and Juliana Brown Eyes-Clifford, are an Alternative Rock Duo of Oglala Lakota ancestry from the Pine Ridge Indian Reservation of South Dakota. Scotti Clifford has performed across the U.S. and Canada as a Vocalist, Back-up Vocalist, Bass-Player, Drummer, and Guitarist. But now the Singer/Songwriter/Guitarist fronts the newly formed duo with Bassist/Rhythm Guitarist/Backup Vocalist Juliana Brown Eyes-Clifford. Scatter Their Own, lyrically, pays tribute to the concepts and philosophy of their Lakota culture while fusing Alternative and Blues into what they would like to call Alter-Native Rock and Roll. They believe that their music celebrates Grandmother Earth.

Details about the performance time and place to come soon, but we hope this news gets you even MORE excited about this year’s institute…