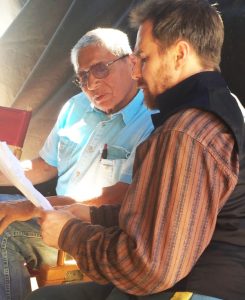 Actor Sam Rockwell, (right), works with LLC board member and Lakota language instructor Ben Black Bear on the set of the new film Woman Walks Ahead.

Not only was Lakota Language Consortium board member Ben Black Bear integral to the successful completion of the Lakota Grammar Handbook, but he was also central to the accurate use of the Lakota language in an upcoming major motion picture, Woman Walks Ahead.

The film recreates the true story of Catherine Weldon, a widowed Brooklyn artist who, in June 1889, traveled to the Standing Rock Reservation in Dakota Territory to help the legendary Sitting Bull hold onto land that the government was trying to wrest from his people. It stars Jessica Chastain, Sam Rockwell and Michael Greyeyes, a Plains Cree Indian from the Muskeg Lake First Nation in Canada and veteran actor, choreographer and director whose appeared in over 13 movies and nearly 30 television programs.

Black Bear spent time at the filming location in New Mexico working with Chastain, Rockwell and others to insure an accurate presentation of the Lakota language in the film.