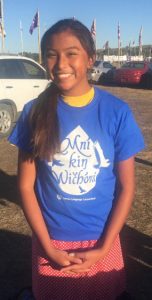 More Than a Pipeline

It’s been thrilling to see the Lakota Language Consortium’s Mní kin Wičhóni (Water Is Life) t-shirts being visible around the Dakota Access Pipeline protest camps at Standing Rock, North Dakota, at #NoDAPL events around the country, and at events like those attended by TLC and LLC staff at William & Mary College and the LA Lakota Language Weekend. Available from both the TLC and LLC bookstore, the t-shirt sales go directly – 100 percent of the funds – to Lakota language programs and projects, so if you’re not sporting one yet this is a great way to publicize Lakota language revitalization and the concerns over the Dakota Access Pipeline.

Over 200 people attended the Rising Voices movie screening and “Standing Rock More than a Pipeline” event we held at William & Mary College in Williamsburg, VA on Sept. 30, which also included a Skype-in Q&A session with Lakota language teacher Alayna Eagle Shield from the Standing Rock #NoDAPL protest site. Standing Rock resident Kevin Locke was in attendance to perform songs and then speak about the link between language and culture and protests at Standing Rock. Following the showing of Rising Voices, Jack Martin, Director of Linguistics at William & Mary, and our own executive director, Wil Meya, talked about Native American language loss and the importance of the revitalization movement. The Q&A session was lively and we were thrilled to see a motivated contingent of William & Mary students who brought signs of support and took selfies with Standing Rock protestors live on the Skype screen to then post on Facebook.

For the next two days, Oct. 1-2, TLC’s Wil Meya, development director Jim Davis, and grants coordinator Courtney Foster participated in a Native American Weekend at the Jamestown Settlement, site of the first European settlement in North America. Kevin Locke was a featured performer at the evening concert, he also hosted flute workshops each day, and our staff hosted a series of children’s language games. There were also three screening of Rising Voices, each followed by a Q&A session with the audience on the language loss issue and our work to preserve Native American languages.

You can expect to see us back at Jamestown next year, as the staff there issued us an invitation to return to present a program for area residents and Jamestown’s 150 volunteers as a fundraiser in early 2017.

We were invited by The Autry Museum of the American West in Los Angeles to participate in its annual American Indian Arts Marketplace as part of their interest in raising awareness about our work protecting and expanding the use of Native American languages. Well over 5,000 people attended the market and an estimated 200 Native American artists were on hand with their original artwork during the Nov. 12-13 event.

It was wonderful to interact with and meet the hundreds of people who stopped by our booth to learn about our work. Native American artist Steven Paul Judd helped our booth create some buzz as he provided one of his original oil paintings, “Dr. Sioux – Cat in the Hat Comes Back,” written in Lakota, for us to raffle off to Market guests. The Autry Museum and TLC will be meeting again soon to discuss other events we can jointly hold at the museum in 2017.