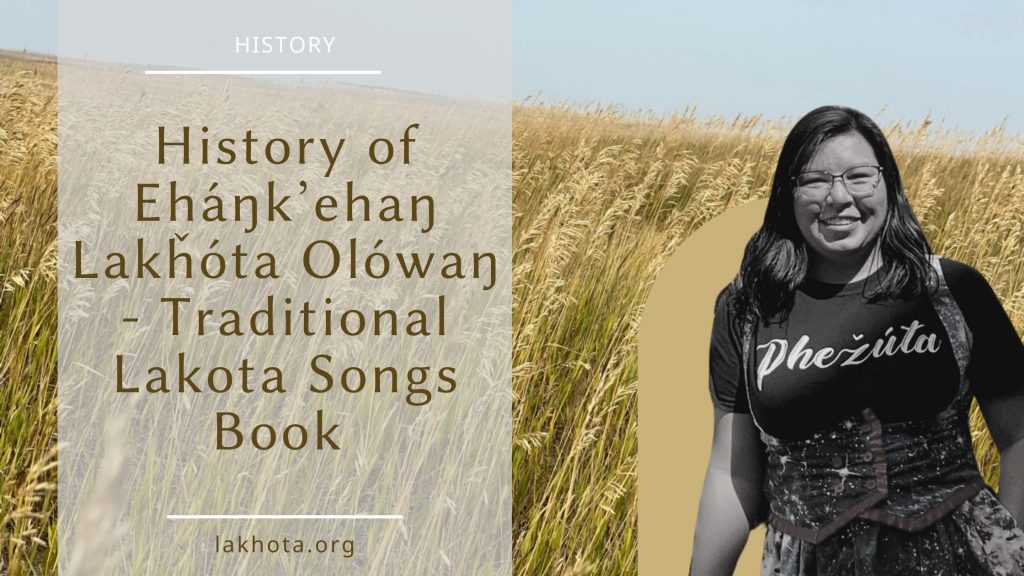 This blog post is written by Shania Black Bear-Searby about the Eháŋk’ehaŋ Lakȟóta Olówaŋ – Traditional Lakota Songs Book which can be found in the LLC bookstore.

The Traditional Lakota Songs book is a legacy that began over 50 years ago. In the summer of 1973 or 1974 Ben Black Bear Jr. and Dr. Ron Theisz began hosting a Lakota song and dance class at Sinte Gleska University (SGU) in Rosebud, South Dakota. The class was created as a demonstration of the potential of the Lakota Studies Department in the early years of Sinte Gleska University. The success of the class later resulted in the course becoming a part of the curriculum at the time, the production of the Songs and Dances of the Lakota book, as well as the Traditional Lakota Songs book.

My name is Shania Black Bear-Searby and I am writing today about my family’s history in creating the Traditional Lakota Songs book. When gathering more information about the early Lakota Song and Dance classes provided by SGU, I spoke with an elder on Rosebud who remembered what the classes were like at that time. She recalls being a bashful young mother who was interested in the class. It was a unique experience that offered an encouraging space to learn and was welcoming to people who didn’t have access to this knowledge. She mentioned that it can be difficult to be a learner in the powwow community and that she didn’t expect the class to be as valuable as it was. The dancers who taught the dances were in their full regalia, there was a drum group singing, and everyone was encouraged to get up and participate throughout the semester. The dances were broken down into lessons that were easy to follow and she said she still holds the knowledge of the dances and songs to this day. It was a very cherished moment to not only know about the existence of this class but to hear about its success almost 50 years later.

In the early years of the Lakota Studies Department at SGU after the summer song and dance class was successful, the instructors changed. Ben Black Bear Sr. took over instruction and Dr. Ron Theisz continued teaching. Ben Jr. outsourced local experts he grew up with and trusted including his father Ben Sr who was a traditional singer. Ben Sr created the Ironwood singers, a homegrown family drum group with his in-laws. Like many Lakota teachers, Ben Sr. opened his home to the group and taught the songs that were eventually taken on the powwow trail. The instruction of the songs and dance class worked as a living project for years being produced in audio, video, and the published book.

The living knowledge of both the songs and the dances included in the Songs and Dances of the Lakota book was knowledge from decades before its publication in 1976. The book was worked on for several months by the main collaborators Ben Black Bear Sr. and Dr. Ron Theisz with help from various other local experts. The book exists as a bilingual text with the Lakota portions provided by Ben Sr. and transcribed by Ben Jr. Dr. Ron Theisz provided the English portions of the book. The goal of the text was to provide instruction about the various dance styles and songs that are essential parts of Lakota culture. Without these songs, it is not possible to understand Lakota culture. When collecting each type of song to include in the book there were some instances where only 1 or 2 songs were included in that specific category. Not every type of song was recorded in this book and is in no way an exhaustive list but it did produce an incredible result.

The Iron Wood Singers collaborated with Dr. Ron Theisz and Ben Sr. to produce the audio portion that was originally recorded as reel to reel tapes then formatted for cassette tapes and later CDs. After the recording of the audio and the book in progress, the Iron Wood Singers along with a collection of dancers were gathered in the Digmann Hall in St. Francis, SD to be recorded by the video department of Sinte Gleska University. The video was completed and pictures were taken to include in the text as examples. Today, very few copies of the original audio and text exist. Our family research and outside sources have not been able to locate the video portion. We fear it has been destroyed or lost with time, either way, it remains inaccessible to reproduce.

The reason this project came to fruition was very simple. There was a want to create materials for Lakota people to learn to sing and dance. The creators involved in the original project had two goals. First, they hoped the book would be put in the hands of teachers across the Očhéthi Šakówiŋ. The humble instruction style that was used was accessible enough that the teachers who picked it up did not need to be music teachers or dancers and could still learn the practices documented in this project. It was enough material to bring into a classroom to teach children. The dream was to have materials to teach intact Lakota culture as Lakota studies.

Unfortunately, the materials did not appear in the classroom and mostly became a part of collections of individual buyers, much to the disappointment of the creators.

The second goal was to inspire Lakota people to learn the songs and dances so they could be inspired and gain confidence and create music, stories, poetry, video, and other art mediums. It was intended to be a start of a process to show our people that it is possible to think, research, produce, and repeat for those involved to create any material they wanted. It was the instruction that came from the home, structured and recorded to go into schools, to again appear in the home.

Reflecting back on this process that existed around 50 years ago it is amazing that this project came to fruition and produced materials against all odds. At the time they were producing this product from scratch and there were very few materials available to base things off of. We sometimes find ourselves in similar situations in smaller communities feeling the need to create structure by researching, creating materials, and developing lesson plans. They did this with little to nothing at the time and pondered if this was right or what their efforts would result in. They took leaps of faith and went with the steps that seemed logical and ran. The incredible moves of the early Language movement efforts became our history and are referenced when making moves today. The University of Colorado materials were available to teach from but this was during a shift in time from a halt in Lakota language acceptance and the deliberate efforts to structure Lakota language learning in academia. The dreams of the Lakota people 50+ years ago resulted in materials that we can use today.

Fast forward to today, we have good news and bad news. The bad news is that very few copies of the original Songs and Dances of the Lakota book and audio by Ben Black Bear Sr. and Dr. Ron Theisz are in circulation today. On occasion, preowned copies will surface on the internet from individual buyers and collectors, which is how I came to own my copy of the Songs and Dance book. (If you have a copy of this book’s recordings reach out to me! I would love to hear them!) It was a preloved copy that came from someone outside of Rapid City. Which is very unfortunate. The good news is that in 2018 Ben Black Bear Jr., in collaboration with the LLC, worked to assemble these songs in print for Lakota people today. The 2018 Eháŋk’ehaŋ Lakȟóta Olówaŋ- Traditional Lakota Songs book exists again as a bilingual text that is a great resource for Lakota learning to teach the language through song and connect with elders in your life about the origins of these songs. There is a proposed phase 2 of the 2018 release to include rerecorded songs as well as video recordings of the dances that accompany the songs as the original project did. The global pandemic and unsecured funding have caused delays in the completion of this project.

This book has a long history that began in the 50s and 60s in Rosebud, South Dakota, home of the Sičháŋǧu Lakȟóta Nation. This book is a snapshot of what Lakota songs were like in this period before they experienced the transition into the modern pieces we hear at gatherings today. Throughout this readily accessible version, you will see 36 different styles of songs in Lakota with English translations. Not only does this book exist as a time capsule for the Black Bear family but provides views of the early use of Lakota language in a classroom setting. I believe this ongoing project is an example of Lakota excellence and our capabilities to do something incredible using the language.

It has been around 50 years since the beginning of the Lakota songs and dance project and sometimes we can still feel unsure of what to do with Indian Studies. We have the ability to get back to the reason we do things and understand Lakota life. This history serves as an example of a way to turn a passion into action that leads to tangible materials for the Očhéthi Šakówiŋ. It goes back to the idea that our experts in Lakota are our elders and first language speakers. We need the opportunity to express ourselves through music, poetry, stories, video, art, and so many other mediums to show the passion that exists in Lakota. There are so many ways the language can be used and inspired Lakota people can do that.

You can find the Eháŋk’ehaŋ Lakȟóta Olówaŋ – Traditional Lakota Songs Book in the LLC bookstore. If you are an educator and need more information on Lakota educational resources you can reach out to customersupport@lakhota.org.

Are you a Tribal member that would like to get started learning Lakota and need assistance accessing materials? Check out this previous blog post about Free Resources to get started Learning. You can also reach out to customersupport@lakhota.org to request materials at no or low cost to get started on your learning journey.

Hello! I’m Shania Black Bear-Searby a Sičháŋǧu Lakȟóta woman from Two Strike, SD. I have been learning Lakota since 2017 with the help of free Lakota classes on Rosebud. When I first began my journey I expected learning to very formal but with Allen Wilson and my grandpa Ben Black Bear Jr. as instructors it was funny, empowering, and easy to follow along. I am extremely thankful for the people who are a part of my language journey. I work with the Lakota Language Consortium as an Associate Media Specialist as one of the people creating content for Facebook, Instagram, and the blog. In my free time I am also a ribbon skirt and ribbon pinafore maker. I look forward to getting to know you and moving deeper into my Lakota language journey!

Click the button below to check out all of our donation options.